One of the longest and deepest traditions surrounding the University of Wisconsin, the Wisconsin Idea signifies a general principle: that education should influence people’s lives beyond the boundaries of the classroom. Synonymous with Wisconsin for more than a century, this “Idea” has become the guiding philosophy of university outreach efforts in Wisconsin and throughout the world...

The Origins of the Wisconsin Idea

The genesis of the Wisconsin Idea is often attributed to former UW President Charles Van Hise, who in a 1905 address declared, “I shall never be content until the beneficent influence of the University reaches every family of the state.” 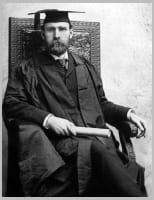 As president from 1903 to 1918, Van Hise saw that vision carried out by creating the university’s extension division (known today as the University of Wisconsin-Extension), which oversaw summer courses and other programs that brought university knowledge directly to state citizens.

He also took advantage of his friendship with Governor Robert M. La Follette, a former classmate at the university, to help forge closer ties between the university and state government; during the early part of the 20th century, faculty experts consulted with legislators to help draft many influential and groundbreaking laws, including the nation’s first workers’ compensation legislation, tax reforms and the public regulation of utilities.

These activities would not formally be described as “The Wisconsin Idea” until 1912, when Charles McCarthy described the philosophy in a book by that name. By that time, Wisconsin had developed a national reputation for legislative innovation.

Over time, however, the Wisconsin Idea has come to signify more broadly the university’s commitment to public service — a mission that substantially predates the progressive political era.

The Wisconsin Idea in Action

See nearly 1,000 recent examples of UW–Madison’s service to the state.

“I shall never be content until the beneficent influence of the University reaches every family of the state.”